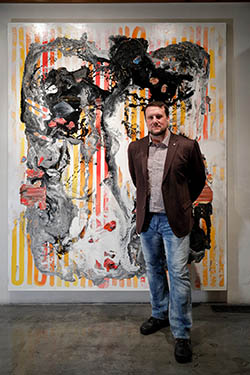 Shawn currently lives in Welland, Ontario, with his wife and children.
He was born in Prince Albert, Saskatchewan and grew up exploring the northern reaches of his home province’s lakes and river systems. Prince Albert, often called the gateway to the north, is located in the broad valley of the North Saskatchewan River near the geographical center of the province where the agricultural prairie of the south meets the rich forest belt of the north. It is close to the famous Emma Lake artist’s school where many influential artists have lived and worked.

Shawn is an Assistant Professor in the Visual Arts Department, Marilyn I. Walker School of Fine and Performing Arts at Brock University. Although initially drawn to an academic career in the environmental sciences, he pursued Fine Arts and Art History degrees in Saskatchewan as well as a Master of Fine Arts degree in Alberta. He has taught for the University of Alberta and the University of British Columbia. His research interests include contemporary painting, drawing and printmaking practices concerning relational abstraction, environmental aesthetics, religion, the landscape as well as issues bordering abstraction and representation.

Serfas’s paintings are exuberant and richly textured. He refers to himself as a landscape painter, but his paintings do not offer mimetic descriptions of the view in front of his eye; instead they probe the idea that science, rather than revealing the processes at work both within the earth and on its surface, only makes us more aware that things are happening that are not obvious to the human eye: the processes behind plate tectonics, global warming and melting ice caps, for example, are invisible to all but the most sophisticated technology. And our understanding of nature has been radically challenged over the past century: as author Johanne Sloane notes in Rainbows and Other Ruins, “…nature really is different than it was one hundred years ago… now we know that nature is likely to be altered, toxified or mutated, whether the ecosystem in question is a genetic sequence in the human body or an isolated mountain lake.”