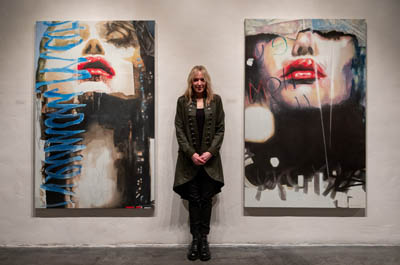 Diana Creasy-Funk was born in Wainwright, Alberta in 1962. She moved to the Okanagan in 1986 and has been painting for as long as she can remember. What started out as simple pencil drawings in school, making sketches of friends, or capturing expressions from people in magazines, she evolved her fascination with human nature into a stunningly beautiful style of portraiture. Her work still has graphite areas showing, where she initially sketches her subject, but a watered-down painting technique fleshes out the work a little bit further, carefully bringing them to an ethereal place.

“Ask any artist and they will tell you that they paint because they have to…. It’s an unexplainable need. I’m no different. I just paint…I have to.

What occurs on the canvas can and does change and evolve in a constant flow, but in the end it’s only just about the process, the ideas, application, physical movements, problem solving, letting go and accepting.”
Diana Creasy-Funk